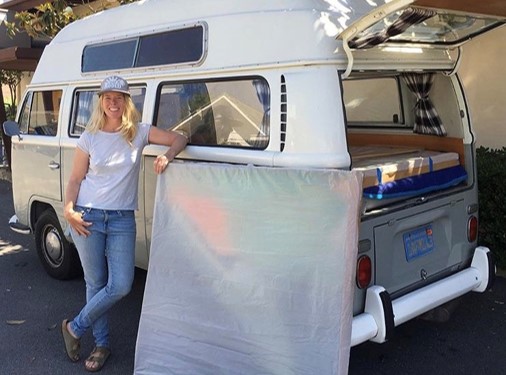 Today we’d like to introduce you to Jennifer Wolf.

Jennifer, let’s start with your story. We’d love to hear how you got started and how the journey has been so far.
I grew up in Southern California hiking in the foothills and swimming in the Pacific. After graduating high school, I spent a couple of years at Santa Barbara City College knocking out my general education requirements, a more affordable approach to college for someone working their way through school. I did well in city college and was admitted to several universities, I chose UCLA in order to stay close to my roots in Ventura, CA.

As an undergraduate, I studied Art History which made sense to me because I have always loved art. This experience deepened my understanding of the impact art has had on all cultures and civilizations. In particular, I was fascinated by the ancient cave paintings that were being discovered around the globe. This inspired my interest in Archaeology and I was awarded a travel grant to spend a summer in Carthage Tunisia doing Archaeological fieldwork. That experience had a huge impact on my future, revealing the fact that I didn’t actually want to become an Archaeologist. While I loved being surrounded by art and unearthing ancient artifacts, the profession itself was a hard road of obscenely early mornings, 115 degree heat, unfamiliar surroundings and an intense loneliness. I also realized that it was making art, not excavating artifacts that I truly resonated with. I returned from Tunisia, I graduated from UCLA and I moved to Venice Beach.

I immediately felt a kinship with Venice. It was a small beach community with an intense local vibe. It had a burgeoning art scene that was gritty, raw, and fostered the sense that anything was possible if you weren’t afraid to try. I wanted to be a part of that pioneering spirit and I was lucky to find a little bungalow on Santa Clara street that I could afford. It had a little patio that was barely big enough to serve as my art studio where I worked on a few commissioned projects. In addition to painting, I waitressed and bartended to pay the bills. After a few months in my little apartment, I met my husband Neil. He was a designer and also someone who was forging a new path for himself. He had a studio a few blocks away on Abbot Kinney Blvd, where he was designing and making furniture and skateboards. Shortly after we met he bought a run-down old duplex in the neighborhood and moved from Abbot Kinney into the duplex we still live in today, 22 years later. Neil wanted someone to sublet his Abbot Kinney studio, so he offered the space to me. Despite the fact that it was more expensive than I could afford at the time, I took the leap and worked extra shifts at the restaurant to afford it.

In the beginning, The space on Abbot Kinney was just my art studio. As I settled into Venice, I started to meet artists from the neighborhood whose work I admired and I wanted to introduce them to the community. I decided to open a project space called the sandbox. I exhibited local artists work in the front gallery space, including my own work, kept my studio in the back and I lived upstairs in the attic. I ran the sandbox for five years working with nonprofits and offering the exhibition space to local artists for a reduced sales commission as a way to pay it forward. Waitressing, running the gallery and making my own work was pretty stressful but I was in my twenties with plenty of energy. As my painting practice grew it started to financially support me more than waitressing. The fact that I could rely on my art to make a living was a dream come true.

In 2003, I met a gallery owner named William Turner who had an exhibition space on Market street near the boardwalk. He was a strong advocate for my work which was great validation for me as I had only shown my work in my own space until then. I began to realize that running the sandbox was becoming a distraction from my own art practice, reluctantly I closed the sandbox in 2003. I moved from Abbot Kinney into the Venice duplex with Neil. We renovated the spacious three car garage into an art studio and I began my career as a full-time painter. My first solo exhibition was in 2004 at William Turner Gallery in the new location at Bergamot Station and I have been working with the gallery ever since. I consider myself very lucky to have been a part of Venice in the late 90’s and early 2000’s. This was Abbot Kinney prior to chain stores and pricey boutiques. It was a street that featured truly local coffee shops like Abbot’s Habit, historic restaurants like Hal’s, where I actually met my husband on a sleepy Monday night. The various art galleries and cool retail shops were the colorful backdrop for Venice life, one that inspired artists and creators like myself. A few of those businesses are still standing and act as nostalgic anchors for me on a street that is exploding in popularity more and more every day.

Overall, has it been relatively smooth? If not, what were some of the struggles along the way?
I grew up swimming in the Pacific because I lived in a van with my mom and two brothers on the Rincon, a strip of road that runs alongside the ocean in Ventura, CA. My parents were jazz musicians, my mom a piano player and my father a stand-up bass player and composer. My father passed away when I was three years old, leaving my mom with nothing but the responsibility of supporting three children on a jazz musician’s wages. Once in a while my mom would get it together and score a low-income apartment off Ventura Avenue, only to lose it a few months later because she couldn’t keep up with the bills, or the paperwork needed to maintain our low-income housing status.

My older brothers hung out with the wrong crowds. They took too many drugs and drank too much alcohol which drove one brother to his death and got the other into a lot of trouble. Witnessing this compelled me to choose a different path. I was lucky to have supportive friends with generous parents that would allow me to stay at their house more than usual and even provide lunch money when I didn’t have any. I am forever grateful for their generosity and I still keep close ties with them today. I am the only person in my family to have attended college, including an MFA from Otis College of Art and Design. I still have the student loans to prove it!

We’d love to hear more about your work and what you are currently focused on. What else should we know?
I’m a painter though I also work in drawing, collage, and sculpture. Although I have worked in these other areas, painting has always been my main studio practice. I am most proud of my focus on the use of natural materials including minerals, rocks and natural dyes as the source of my pigments and color palette. My experiences in Archaeology definitely had an impact on my painting practice, inspiring me to look at the earth and historical techniques of painting in a different way. Archaeology helped me to recognize that history is not only the valuable evidence of the past but can inspire stories of the future.

For me, that future is rich with color made from oxides and mineral deposits that run deep in the earth’s crevices. For nearly two decades, I have nurtured a palette that tells the story of the places I’ve been, the labor that I have invested, and the curiosity that I have cultivated. It is my color palette and focus on fluid reactions of paint that sets me apart and gives my work a naturally distinct feel at a time when color just comes out of a tube.

If you had to go back in time and start over, would you have done anything differently?
Nothing.